Snug as a Bug in a Rug (or Mud): Insights into Overwintering 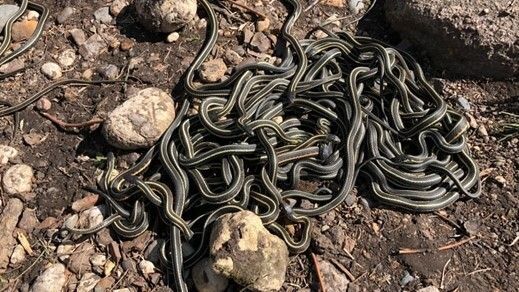 Just as some people spend their winter months in Florida or Arizona, migrating species like monarchs (Danaus plexippus) and ruby-throated hummingbirds (Archilochus colubris) fly south, exiting North America in mass and making the long journey to Central America and the Caribbean. At the same time, other species like the American goldfinch (Spinus tristis) and the goldenrod soldier beetle (Chauliognathus pensylvanicus) stay put, using a variety of techniques to survive the extreme cold and harsh conditions of winter in Nebraska.

Hibernation vs. Brumation
Hibernation is defined as an extended state of slowed metabolism, but because not all animals do this, a more biologically correct term to use is overwintering. Some animals like coyotes (Canis latrans) and Virginia opossums (Didelphis virginiana) do not overwinter at all and must actively search for food during all months of the year. Coldblooded animals like our native Blanding’s turtle (Emydoidea blandingii) and prairie rattlesnakes (Crotalus viridis) engage in a process called brumation. Since ectotherms rely on ambient temperatures for body heat, they must completely alter their metabolism to survive the below-freezing temperatures. Instead of relying on stored body fat to insulate and power metabolism, reptiles and amphibians must slow their heart and respiratory rates significantly, while not eating or digesting food in order to maintain a prolonged period of torpor.

One similarity between brumation and hibernation is the use of hibernacula by most species. Hibernacula are underground chambers in which species seek overwintering refuge from the elements. These are used by bears, foxes, snakes, frogs, insects, rodents and many other species to protect themselves from the cold winter winds. Typically, these chambers are abandoned burrows, hollow tree stumps, log piles or fissures in the bedrock. Most hibernacula allow the inhabiting species to go underground where the temperature is around 55 degrees Fahrenheit, enabling the animals to escape the permafrost above. This high ambient soil temperature allows all species to survive when burrowed beneath the surface.

Another strategy that larger vertebrate animals use to further protect themselves from cold temperatures is mass brumation. We often see this in snake species, where hundreds if not thousands of the same species of snake will den together in clumps, raising the den temperature which in turn raises their body temperature. A common species that uses this technique is the garter snake (Thamnophis sirtalis). Meanwhile, a lot of aquatic amphibians and reptiles will overwinter underwater, covering themselves in sediment and completing gas exchange through their skin to survive the extended period of low metabolism.

Diapause
Smaller species such as birds and bees may also use different techniques than our ground-dwelling species. Hibernation in insects is called diapause, a period of suspended growth and development for insect stages like adults, eggs, larvae and pupae. Honeybees tend to overwinter within their hives, using honey reserves to power the hive during mass brumation. Other insect species such as mosquitos and spiders will attempt to find places under bark, beneath leaf litter and in tunnels to escape the cold. Several bird species, such as northern cardinals (Cardinalis cardinalis) and black capped chickadees (Peocile atricapillus), however, must also eat year-round, and thus take shelter in only the most inclement of weather.

How to Help Our Animal and Insect Neighbors Overwinter Well
By implementing the following simple practices, we can play a vital role in helping the species around us overwinter successfully.

Next time you're burrowed into your couch while Nebraska's winter winds blow, remember that there are thousands of insects and animals, big and small, doing much the same thing right in your own backyard.