Native Snakes are Beneficial to Gardens 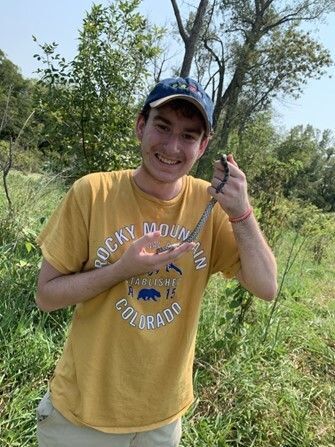 A common theme in contemporary gardening practices is to plant native vegetation to help restore the loss of native ecosystems across North America and globally. Temperate grasslands are the world’s most endangered ecosystem. In Nebraska specifically, we have lost over 90% of native prairie over the past two hundred years. These losses are primarily attributed to the increasing need to convert native prairie to agricultural land to feed an ever-growing population. For these reasons, it is more imperative than ever to plant native species in your yard, helping to push our precious prairie back towards prosperity. Furthermore, the planting of native species benefits the insects and animals that rely on those plants for food and habitat. Specifically, the most ridiculed of your little gardening helpers, snakes.

There are several native species of snakes that positively affect yards across Nebraska. These beneficial species include the common garter snake (Thamnophis sirtalis), fox snake (Mintonius vulpinus), bull snake (Pituophis melanoleucus), and North American racer (Coluber constrictor). Dr. Dennis Ferarro, professor of conservation and herpetology at the University of Nebraska-Lincoln was kind enough to sit down to discuss how beneficial these backyard friends are for us. So how do these native snake species benefit the ecosystem as a whole? According to Dr. Ferraro, snakes fill a crucial niche, connecting multiple trophic levels together throughout their lifetime. What this means is that as a juvenile, snakes are vital prey for birds and rodents, however as adults, snakes act as important predators for insects, rodents, and other small animals. Their role is critical in maintaining natural ecosystems, as over 90% of snakes do not make it to adulthood, providing necessary nutrients to other elements of the food web. Additionally, the prey that these species eat is often organisms that are considered pests to gardeners.

Garter snakes and North American racers eat anything from earthworms and slugs to grasshoppers and other small invertebrates, helping maintain a healthy balance within your garden. They play a key role in keeping large pest populations of insects under control, limiting the impact these populations can have on your garden. Larger snakes such as fox snakes and bull snakes are prolific rodent hunters. Fox snakes are the smaller of the two species, and they are well known to keep voles and shrew populations tightly controlled. Bull snakes are expert gopher hunters, using their superior sense of smell to lead them down mazes of tunnels for their meals – which is how bull snakes derived their other common name: gopher snake. Besides playing a significant role in maintaining a healthy garden ecosystem, there are several other reasons why snakes are a beneficial natural visitor to lawns across the state. Snakes are not a vector of zoonotic disease transfer, meaning they do not have the ability to pass sickness onto humans like other animals do. This is vital as snakes' prey heavily upon rodents, a group of animals known to be vectors for several diseases such as the bubonic plague. Thus, snakes naturally remove species known for harboring diseases out of the ecosystem, while eliminating the threat of passing those diseases to their prey. Additionally, native snake species of Nebraska will not negatively impact the plants growing in your garden as they will not uproot plants through digging, and they cannot digest plant material - meaning they will never eat any of your plants. These are vital factors to consider when discussing how helpful snakes can be to the garden.

There are several things that we as gardeners can do in order to maintain a healthy ecosystem that promote the presence of snakes. First off, domesticated animals such as cats and dogs are natural predators to snakes. It is increasingly being recognized that outdoor cats heavily affect both snake and bird populations through predation; therefore, limiting the interaction our furry friends have on our native snake populations is critical. Second, hawks and other raptors are major natural predators of snakes across Nebraska. Giving snakes cover through tall prairie grass is necessary for them to be able to survive long enough to become effective hunters themselves. If we can eliminate some of the stress these predator populations have on native snakes, our gardens will see vast improvement through a natural balancing act. Finally, giving native snake species a place to brumate (aka hibernate) during the unforgiving winter months, will help promote their presence and the benefits they bring. Due to the fact they are cold-blooded, winter temperatures across this state would certainly mean death, if not for ways to go underground, or within tree stumps to escape the frost. Ultimately, there are several things we can do to help our native snake populations thrive, helping us to keep our garden natural and free of pests!