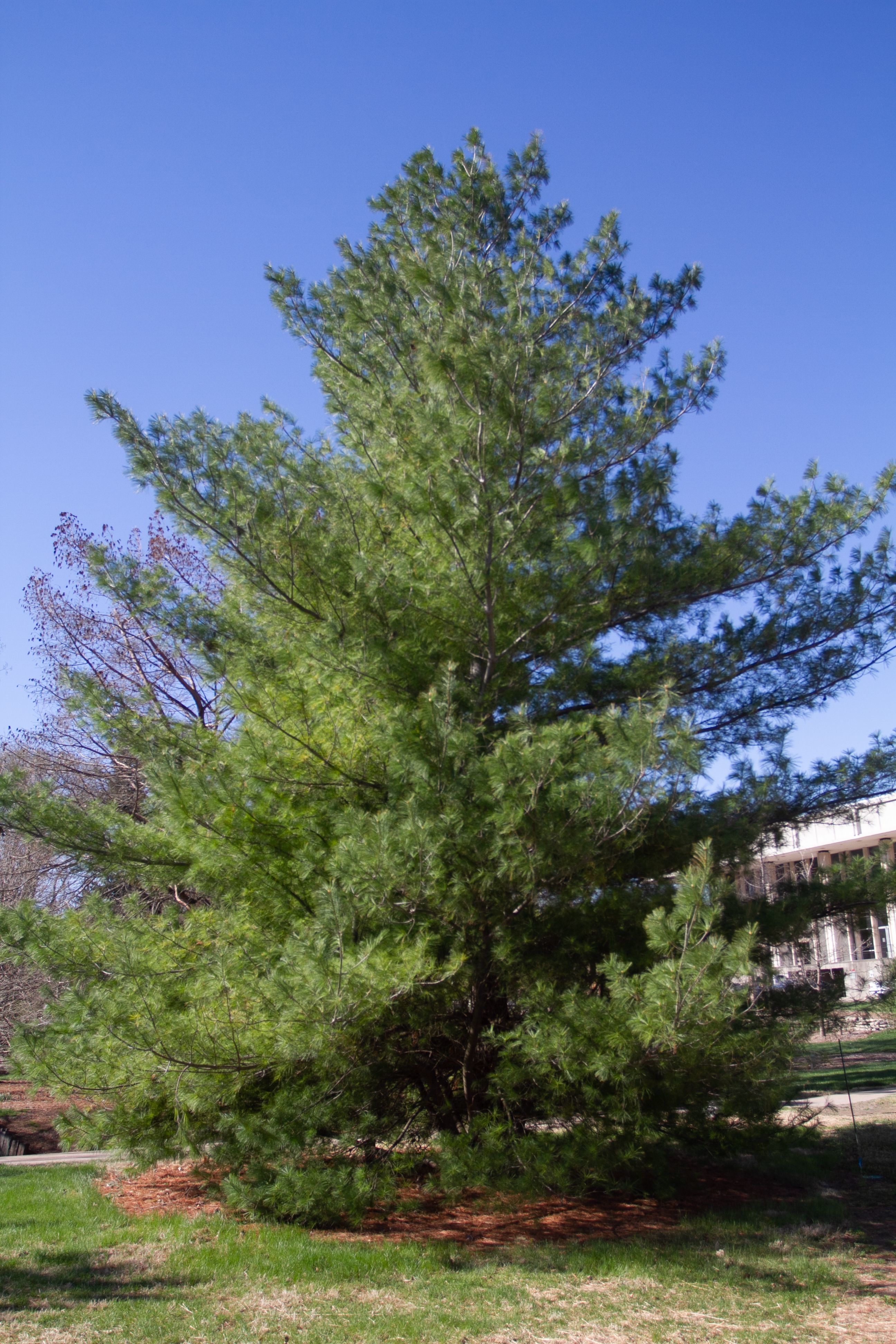 When we think of shade trees, those trees that have a higher canopy casting shade over things below, we don’t often think of pine trees. Most evergreens, including spruce, fir and pine, have an excurrent or upright growth habit for most of their life. They’re typically pyramidal in shape, wider at the base than the top. This makes evergreens especially useful for windbreaks and visual screening, or as specimens to break up the winter monotony. But some pine species can buck this trend as they mature becoming rounded in shape, losing lower branches or growing wide enough that their mature years are served better at casting shade than blocking wind.  Two of the most prominent in this regard in Nebraska are the ponderosa pine (Pinus ponderosa) and eastern white pine (Pinus strobus).

Ponderosa pine is Nebraska’s most common native pine found in abundance in the Wildcat Hills and Pine Ridge of the Panhandle while also cloaking the Niobrara River Valley and its tributaries running as far east as Holt County. The tree has fairly long needles (up to 10” long) that are tufted at the ends of branches giving those branches a distinctive foxtail-like look and resulting in a less uniform crown. Ponderosa pines also naturally shed their lower limbs over time, which was likely an evolutionary adaptation that helped keep wildfires from jumping into their canopies. This branch shedding can happen at a fairly young age which might work against its use as a single-row windbreak but which makes it fairly well suited as a shade tree (with a little patience).

One of the nicest features of a maturing ponderosa pine is its attractive bark. When young, the bark is a fairly nondescript black-brown, but over time it becomes a mottled tapestry of yellow-orange to cinnamon-red scaly plates irregularly bisected by dark brown furrows. A less-used common name for the tree is yellow pine, in reference to its somewhat yellowish bark (I see orange more than yellow). Anyhow, the lovely bark of a mature Ponderosa pine is an aesthetic bonus revealed as the tree gradually lifts its skirt while maturing into a shade tree.

Most Nebraska communities are home to many large ponderosa pines now functioning as shade trees, although I’ll bet many were not intended for that purpose initially. In eastern Nebraska, where the humidity is higher and fungal-caused needle blights are more common, the use of Ponderosa pine as a widely-spaced shade tree with more air flowing through its canopy is a better idea than packing them tightly into a windbreak. In western Nebraska, where the air is drier but where fewer tree species can survive, ponderosa pine not only makes a great choice for a windbreak but also a good shade tree.

Another pine that lends itself to shade-tree status over time is the eastern white pine which is native to vast swaths of the northeast US and eastern Canada. Although it doesn’t become as open and rounded with age as ponderosa pine, it is one of the widest growing pines often reaching 50’ wide or more. Because it can engulf a space fairly quickly, the lower branches of white pine are often removed to make room for it’s wide spread, thus enabling the tree to become a functional shade tree. White pines can truly become massive in eastern Nebraska and most eastern communities have huge white pines now casting wonderful shade. A good example is Falls City where the state champion and several other specimens reach over 100’ tall.

Speaking of evergreens, eastern and southern Nebraska, western Iowa and all of Kansas are home to only one native evergreen – eastern redcedar (Juniperus virginiana). There were no native pines here in this tallgrass prairie region that straddles the line between east and west. From Omaha, the closest native ponderosa pines are about 200 miles away in Garfield County and the closest native white pines are about 200 miles away near Eldora Iowa. Neither tree is technically native to eastern Nebraska, but they will grow here, thankfully so. If you’re into birding, both species provide good refuge and food to a wide variety of birds.

Part of the fun of trees is seeing how they change over time. Ponderosa pine and white pine may start their lives as Christmas tree wannabes, but they can mature into grand shade-casters worthy of watching over a variety of human activity happening below.